My life ain’t interesting enough for me to have one of them journal blogs where I tell you what I did with my weekend and how I schmoozed with the stars and had a wild and crazy time. If I was to detail everything that my weekend entailed, you’d blink slowly and unsubscribe from this blog PRONTO because it was just that unexciting. However, this weekend was productive for me in EVERYway except in writing a real blog post. BUT I gots some news.

Best thang bout my weekend was that The Black Snob featured my “Dear Kanye” letter as her guest post on Saturday. I indeed did a coupla jigs when she told me she wanted to do it. Thanks, Danielle!!! Y’all got me all verklempt from all the love you been showing me. *Sigh* How’s a sista s’posed to maintain her thug when y’all are *sniff* making me feel special and whatnot?

Oh, and as I promised in the “Dear Kanye” letter, one of Kanye’s dudes had on le 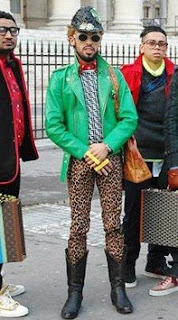 opard-print leggings. The words “homeboy”, “leopard-print” and “leggings” should never be uttered concurrently in a sentence. EVER. (10 points to anyone who can form a sentence where using these words together can be acceptable. Shoot, I may even post the winner’s sentence on my next blog). So here are the people’s sentences (all hilarious):

“Dammmmn did you see homeboy’s girl though, wack as hell in them leopard print leggings!” – Chanel

“My homeboy left the concert as soon as R. Kelly came on stage in some leopard-print leggings” – RB

“My homeboy had sex with a beautiful blind chick despite the fact that she had on leopard skin leggings.” – Peyso

“DAMN..Homeboy Ye is trippin but Amber is the bangingest in them leopard leggings!!!!” – Goodeness

I love ’em all! RB & Peyso’s just bout killt me though.

I spent a bit of my weekend designing a widget for a campaign I’m announcing today (yes, yes y’all. I also do a little designing on the side. Side hustles make the world go ’round).

March 10th is National Women and Girls HIV/AIDS Awareness Day, and my girl Karyn of The Fabulous Giver and I came up with the idea of The Red Pump Project. The concept is simple: On March 10th, we’d like female bloggers to rock the Red Pump widget that I designed on their blog to represent the strength and courage of women fighting HIV/AIDS or affected by the disease. And to raise awareness about the epidemic and its effect on women (Black women especially, who make up 66% of women newly infected with HIV). To sign up to participate, please just comment on this post with your email address, or hit me up at Luvvieblog at gmail dot com. If you sign up, I will send you instructions and the html code of the widget. Also, your blog will be linked on a post on my blog that will run on that day. Our goal is to get at least 100 bloggers to participate in the Red Pump Project. Besides, the Red Pump will add a touch of FIERCE to your already FABULOUS blogs! Your participation will be appreciated a TON!

Sidenote: I literally spent ALL of Saturday designing the Red Pump. I drew it by hand first, then executed it using Adobe Illustrator. You woulda thought Christian Louboutin himself gave me the assignment. I got to pretend that my dream of being a shoe designer for an Italian company came true. *Sigh* Some dreams are permanently deferred. BUT, I would TOTALLY rock that red pump! You shall all see next Tuesday.

And no, this PSA doesn’t come with a M-list celebrity and Hailey’s Comet. It’s no less awesome though 😀

With ALL of that being said, I shall be back tomorrow with an actual post.

P.S. After my post last week about kids that aren’t all that fortunate in the face, I figured that I would need to start doing more GOOD if I wanna scoot into the Pearly Gates of Greatness. I gotta counteract my IG somehow! LOL just kidding, but the timing IS impeccable, ain’t it?