I came across these gym shoes (as we like to say in Chicago) or sneakers, as the rest of y’all call ’em. The name of these shoes is actually the Jeremy Scott x adidas Roundhouse Mid “Handcuffs.”

*blinks slowly* These shoes really got some plastic shackles. FAH WHY??? What is the point? Why would I wanna rock some high tops with cuffs on them? I WON’T!

I know innovation is important and Adidas is tryna push the envelope but if they’ont tell Jeremy Scott to get in the garbage, I will. Harriet Tubman didn’t wade in the water so Juneteenth could exist for Adidas to make these sneakers. Sojourner ain’t speak her truth for this. Frederick ain’t part his ‘fro JUST RIGHT for these shoes to be so oppressive. NO MA’AMS! I AM FREE NOW! I’M IS FREE NAH, I SAY!

I don’t need no house arrest shoes! This is prison reminiscent, and I have never been and God willing, I won’t ever have to go, even just to visit someone. HEAR MY CRY, LAWD.

Either way, do not want.

And I bet people are gonna go out and buy these thinking they’re fresh. But they could be dope if they didn’t have the yellow shackles. Are those removable? I hope so.

And these cost $350. THREE HUNNID FITTY DOLLAHS. For SHACKLE SHOES. iRebuke the thought.

Whose Extreme Kitten Heels Are These? Whose Aunty’s Obama Heels Are These? 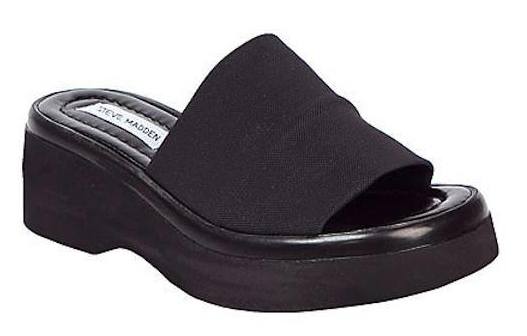 Those Steve Madden Slide-Ins We All Had: Throwback Thursday