My Thoughts About the Premiere of R&B Divas LA

Last night, I tuned in to watch TVOne’s R&B Divas LA, and it was actually pretty good. By pretty good, I mean it promises to be a drama-filled show because of the explosive personalities on there. Also, it was a great way to take a walk down memory lane with some of my favorite 90s singers.

R&B Divas LA stars Kelly Price, Dawn Robinson (of En Vogue), Chanté Moore (no, she ain’t got a man at home anymore), Lil’ Mo, Claudette Ortiz (of City High) and Michel’le. The ladies are all gifted vocalists who were popular at one point so they’re tryna get back to the top. Let’s get into my random thoughts on the premiere episode.

The between scene transition of the R&B Divas LA is INCREDIBLY annoying. It’s usually one of the 6 ladies doing a vocal run. I seriously wanted to dropkick a teddy bear by the 3rd time. My Twitfam said they’re used to it because they watched R&B Divas ATL. But since this was my first time watching an episode of this series, I was like WHAT IN THE HELL?!? Ugh. I would say it’s gon get old quick but it already got old 10 minutes in. Womp.

Asymmetrical cuts are all the rage, huh? Kelly Price and Dawn Robinson were rocking these asymmetrical cuts that lowkey made me miss T-Boz. I need her to make a cameo this season to make them a trifecta of unevenness coifs.

Lil Mo is going to be too much to deal with. It’s clear that Lil’ Mo is going into this show with the intention of being the drama queen because she’s already doing the most with the least in her confessionals. Chick is being all extra and neck-swerving and trying too hard, in all her lilliputian glory. You know how little dogs always wanna bark extra to prove their presence? Yes. That’s her. 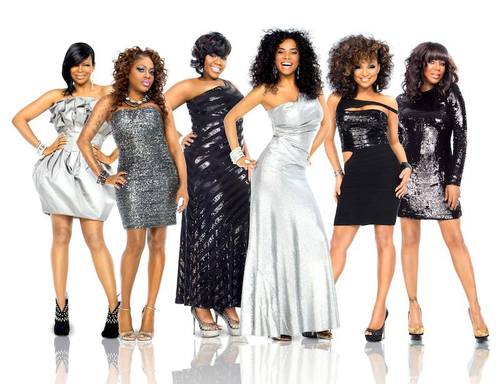 Also, the comment she made about her trying to get to the level of Beyonce. Chile, I’ma just be quiet.

That wasn’t an open mic. The first episode revolved around re-introducing us to the ladies as Kelly Price plans an open mic she wanted them to sing in. Except it wasn’t an open mic as much as a concert. They even practiced with a choreographer. I’m like “see… somebody lying.” I didn’t mind it though, because I did wanna hear them sing.

About Michel’le’s speaking voice… it’s going to be a problem for me all season. I admit that I didn’t know who she was when she came onscreen. She was the only one I didn’t recognize and my Twitter folks schooled me on her music by sending me links. And then I heard her speak. And I wanted to give myself a papercut. makes me wanna give myself a papercut. Lawd, please forgive me but she sounds like she swallowed ALL THE HELIUM.

BUT… when she got on stage at Kelly Price’s open mic, she SLAYED! So I kinda want her to sing everything she ever says. Because. Yes.

Kelly Price loves her some leather. At her open mic night, Kelly came on stage rocking some leather skinnies and I realized how much she really enjoys cowhide. Remember when she used to rock them long Morpheus from Matrix floor length leather coats? She ain’t e’em care what season! The video her and Whitney Houston did for Heartbreak Hotel was filmed on a beach. Kelly put on a sky blue leather muumuu and dared folks to say something. She’s all:

I had forgotten how amazing Chanté Moore’s voice is. Seriously. When she sang at that open mic and ended it with like a 2 minute SUPER HIGH falsetto run, I wanted to throw a handkerchief at my damb TV as I yelled SAAANNNNNGGGGG!!!

But for real, though. She sounded AWESOME! Like Kelly said, folks think only Mariah Carey can hit those glass shattering notes but Chanté did it without breaking a sweat. I am re-HERE for her. Yes. Re-here.

Claudette Ortiz is gorgeous and her voice is pretty dope. Another person I forgot could sing because the drama attached to her name overshadowed her talent. At the open mic when she first started singing, folks were all “Harpo, who dis woman?” And then she won em over with her voice. The fact that she was with both her bandmates, and had kids with them. Plus, there was that episode of intervention with Robbie. Whooo… But it was good to see her working her way back. She seems sweet.

Also, Michel’le has kids by both Dr. Dre AND Suge Knight?? Well damb.

Dawn Robinson’s singing voice is kinda weak to me. When she got onstage at the open mic and complained to us in the confessionals that she hadn’t done mic check, I knew she was preparing us for it. Her performance was all MEH. And next to the other ladies, her voice was the weakest.

But ennehweighs, I’m looking forward to this season because they showed us some previews of coming scenes. In one of them, Kelly Price comes prepared with timbs and vaseline and Chante says she doesn’t need accessories because she’s ready whenever. I’m not saying I condone fighting but ummm… I do agree to enjoying the threats they throw at each other. I’m petty. Lemme live.

So did you watch R&B Divas, LA? Whatchu think?