Jermaine Jackson has somehow turned out to be the oddest man in a family of really talented weird people and that is no small feat. Besides all the foolery he partakes in, like changing his last name to Jacksun (O__O) and being stuck in Africa because of his lack of child support payment, the dude has been walking around with hair paint for years.

He was on Celebrity Wife Swap the other day and folks were treated to this visual: 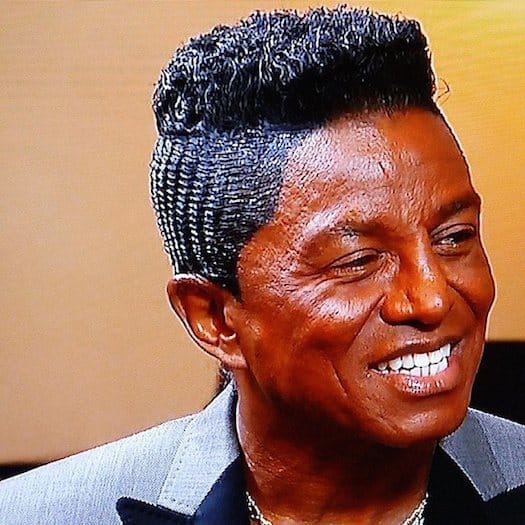 WHAT IS THIS, JERMAJESTY’S DADDY?? Jermaine cut off the growth on a chia pet, dipped it in tar and glued it on his scalp like TADA! I’m so unable. I think this is an artistic rendering of the BP oil spill. Maybe we just aren’t appreciating the depth of Jermaine. Maybe he invested in Sharpie in the early 90s and he just wants to make sure it remains profitable.

Jermaine is unable to matte. He’s so matte-deficient ALLATAHM. Skin looking like the finest patent leather… I can’t deal with him and unidentified textured hair paint coiffure! I just cannot. Can science solve this mystery for us? We’ve made it to the moon. Surely, we can figure out what Janet’s brother and Katherine’s son is rocking as a hairhat.

“it’s like…waves of melted electrical tape and a kufi made of badger fur on top. also whatever he’s using is clearly sweatproof. Because Jermaine has remained oily skinned all his life and it remains in PLACE despite the spotlights he perpetually tries to be under.”

But really. What is this on his scalp?? Talk amongst yourselves. I am CRYING laughing already.