Muhammad Ali. The Greatest is gone.

Unlike the other iconic deaths of 2016, Muhammad Ali’s doesn’t break my heart or render me unable to function, because he was older than most of the others, and his life was lived fully. Although he spent the last 32 years of his 74 battling Parkinson’s, he still managed to LIVE.

Even so, this is still a major loss, and the gut punch from losing The Greatest is real. Muhammad Ali was a superhero, and you don’t fully expect Batman to die. He just keeps fighting another day. But that’s more of a selfish desire on our part. He’s been fighting for so long that he has a right to rest. And rest he will.

He was so much more than the boxer who leveled his opponents with barely a sweat, leaving them to think they even dreamt the entire match up. Some of the folks whose asses he whooped gotta think they made it up since he did it so quick.

He was so much more than that bae ass athlete with the smile that lit up a room. LAWD, young Muhammad was FAHN, bruh. With swag for days and weeks. And he knew it, and was insufferable because of it, calling himself pretty. But when you can’t argue with it, all you can do is sulk and take peeks at him because he surely was a handsome somebody. He was so much more than the EPIC shit talker who would call your mama to the carpet and you had to deal because he could back that up ALL day. He was a rapper before we even know what rapping was, because he had BARS. He ethered folks each and every day. Like when he said: “Joe Frazier was so ugly that when he cries, the tears turn around and go down the back of his head.”

LMAO!!! That is so disrespectful and hilarious at the same damb time. KING PETTY WAP IN THE BUILDING. You know how I feel about icons who were also shade savants. They hold special place in my shady heart.

Most importantly, Muhammad Ali was the fighter who refused to fight when his spirit told him the fight wasn’t fair. His stamina was unyielding but his integrity was even more so, and his toughest fight wasn’t even in the boxing ring. When drafted to fight in the Vietnam War, he laid everything on the line, including those titles AND his freedom, to stand for what he believed was unjust combat.

My conscience won’t let me go shoot my brother or some darker people or some poor hungry people in the mud for big powerful America. And shoot them for what? They never called me nigger. They never lynched me. They didn’t put no dogs on me. They didn’t rob me of my nationality, rape and kill my mother father and ancestors. Shoot them for what? How can I shoot them poor people? Just take me to jail.”

That voice. He was The Greatest for so much more than being The Champ. He fearlessly used his voice to speak up and dare to go against the grain. Being this unabashedly loud in that time was more than brave; it was dangerous. And he did it anyway.

I mean, the man was just the TRILLEST. The Unfuckwitable. Cassius Clay became Muslim and insisted that the world call him Muhammad. Then told them to take their war and shove it because he ain’t going. That’s some levels beyond dauntless.

I honor all the professional troublemakers who push through fear to speak up in the hardest circumstances and I’m emboldened by them. The ripple effect from words can lead to rumbles in action. Muhammad Ali recognized his elevation, and used it to speak truth to power about anti-Blackness. Hard truths to the powers that be, who could destroy his life. He knew the space he took up in the world, as a powerful sports figure, but even moreso as a Black, Muslim man. His battle wasn’t just nine rounds in the ring. It was his Blackness being seen as a weapon and liability. When we remember Muhammad Ali and eulogize him, we have to remember how much he loved his Blackness. Do not whitewash his legacy. Remember that Blackness. Because when the greats die, folks love to windex away their melanin. Nah. He was unapologetically BLACK.

The man had BARS, man.

It’s been a rough year, with the deaths of many legends. David Bowie. Natalie Cole. Prince. Now Muhammad Ali. Each time, I am struck with a sense of urgency to find something to fill the space. When greatness leaves this plane, we gotta make up for it by stepping into greatness. The void can’t be filled but don’t let the gap be so wide. This pic made my heart hurt a little bit. Look at the joy on Prince’s face!

Muhammad Ali was the greatest in the way Kanye says he is (shade). But even with Kanye, there is something courageous about seeing yourself as larger than life. That’s a revolution in itself. It’s arrogance, but in it is more courage than I like to admit.

In large losses are large lessons. #1 here: 2016 has no chill whatsoever and it’s a disrespectful summagoat. #2 is: there will never be a perfect time to step into your purpose. You might not float or sting but you gotta move and do. I bet that Mr. Ali had no regrets on that death bed.

That’s why I am sad but not devastated by Muhammad Ali’s death. He won his fight and he’s hanging up the belt. 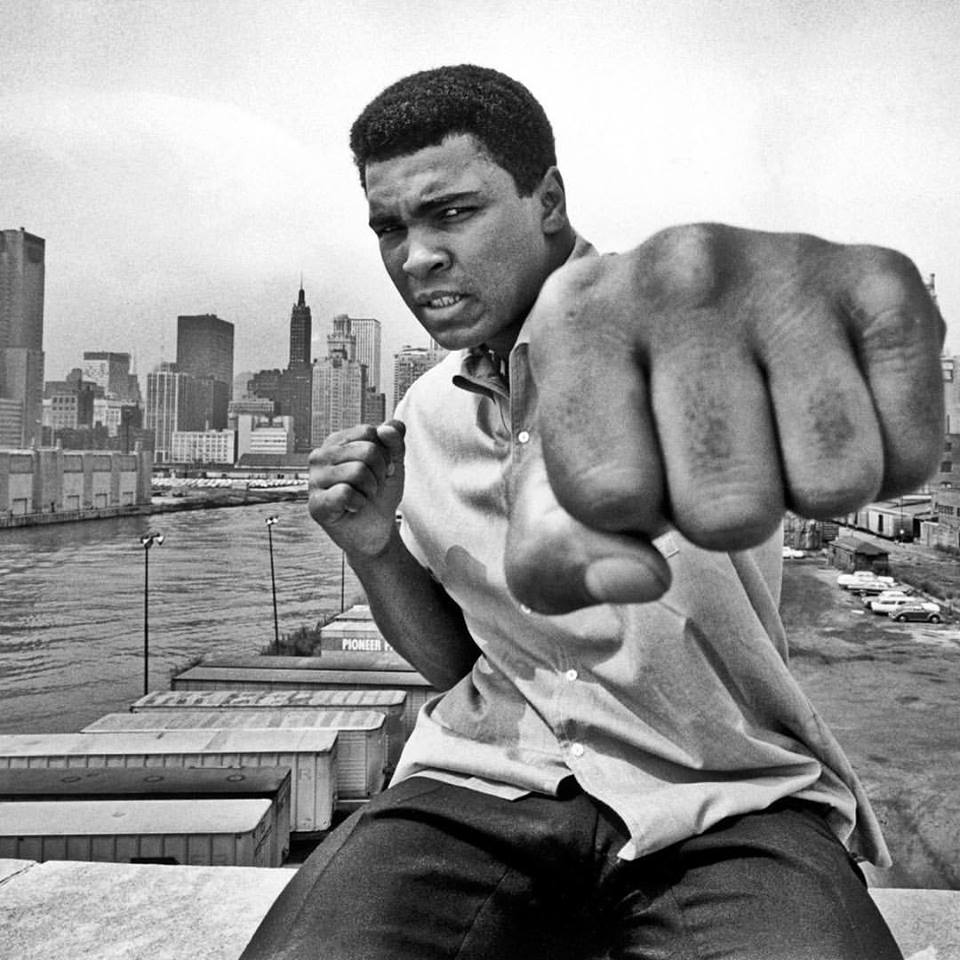 “I can drown the drink of water, and kill a dead tree. Wait till you see Muhammad Ali.”