Yesterday was the Black event of the month: the premiere of BET’s The New Edition Story. A TV series about the come up and break down of Ricky Bell, Ralph Tresvant, Bobby Brown, Mike Bivins, Ronnie DeVoe and Johnny Gill? I’m in there like a wedgie!

It was no game. I had this on my Google Calendar since it was announced and I was not gonna miss it. Plus, these are the nights that Twitter was made for. To sit in the privacy of our homes, watching television and reading what people we’ve never met think about it. This is my SuperBowl.

I wasn’t even born when New Edition first came out (I’m a 1985 baby. They came out in 1983) but their music has such staying power that I don’t remember NOT knowing “Candy Girl” and “Mr. Telephone Man” even though I grew up in Nigeria. This was must-see, and thankfully, it did not disappoint.

Soooo here’s my recap, in the form of questions.

Why has Bobby Brown been shady since birth? In his first scene, Little Bobby was lying to his boys about a non-performance he had, and that he’d allow them to sing. He ain’t been right forever. Also, how did the casting directors find a boy who looked 57 at the age of 9? Bobby been old since he was born  and they found his child match. Impressive. Speaking of… 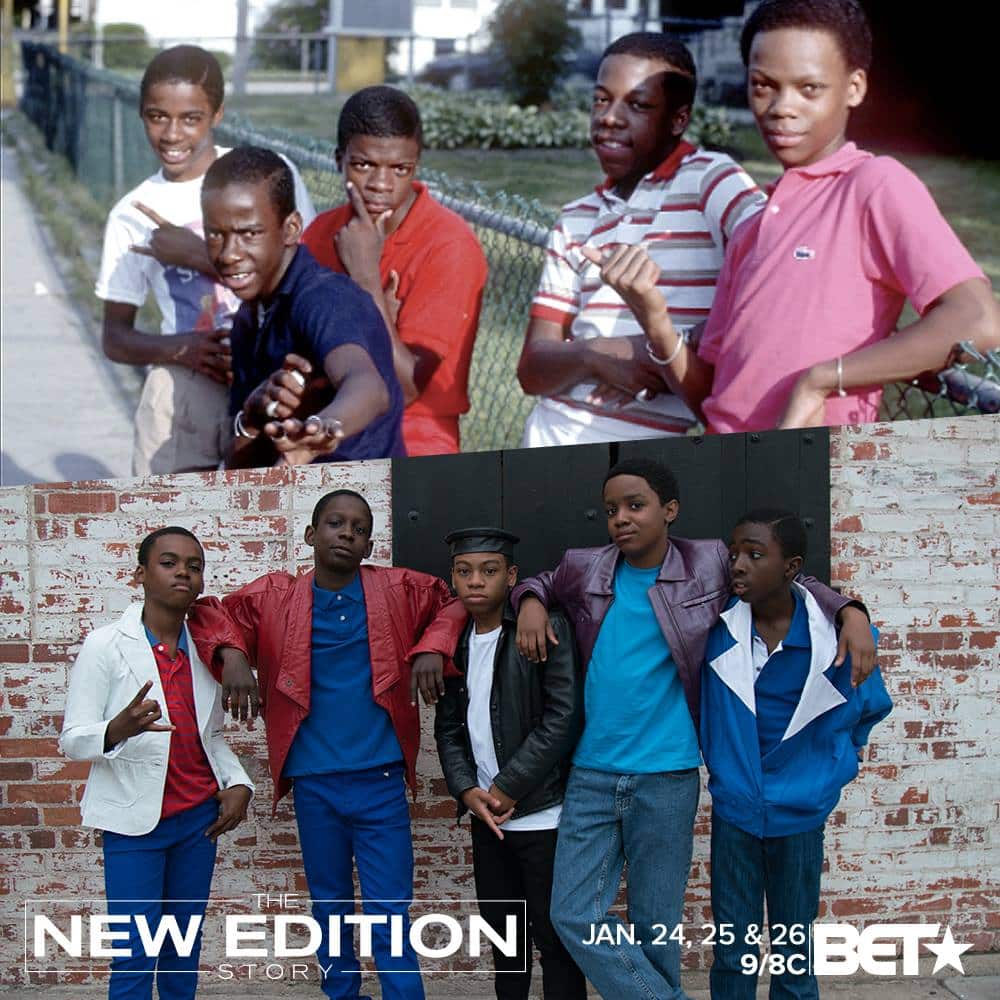 How dope was that casting? Seriously. The boys who played New Edition were incredible. I was so impressed by them that I didn’t want to see them grow up to their teenage versions. Especially Little Ralph Tresvant (played by Jahi Di’allo Winston). That young dude is going places. Not only did he really commit and had me thinking I was looking at Ralph, but he did all those vocals too, hitting them high notes like that was what he was born to do. SO GOOD.

Everything about the boys was so authentic, down to the ashy knees as they rehearsed. Those were the legit knees of pre-teens who don’t like to moisturize.

Why was Brooke Payne’s jheri curl so dry? Played by Wood Harris, who will always be Avon Barksdale (shoutout to The Wire), New Edition’s first manager didn’t have his soul gloing like he should have. Maybe he couldn’t afford products because he spent all his money investing and building the group. Look at all that sacrifice he made.

Why were the wigs so tragic? Between Faizon Love and his George Washington ass wig, as well as Tank’s lego flat top, I was wondering what happened to the hairhat budget. Yes, I was happy to see Faizon had a job but I was too distracted by the wig. It looked like a sleeping animal and I was expecting it to wake up from its nap at any moment. Is there a role Monica Calhoun has had where she ain’t the Matron Saint of Struggle? I love me some Monica but seeing her in the film playing downtrodden, as Ralph’s mama, just made me wonder. Have we seen her be jovial in a movie? I asked this question and folks said she was happy in “Sister Act 2” when she was a part of the choir. And I howled to the blue-corned moon. Bless her. I’m just happy to see her working too. I root for her.

Ain’t it just right for Bobby Brown’s mama to get Brooke Payne fired? When the NE moms got mad that the boys were touring all over the world but only brought home a check for $1.87 (ouch), they decided it was time for Brooke to be gone. Brooke, who had also made 0 money while managing the boys because they all entered into a crappy record contract. I feel like he got cheated. All that work he did with them, just to be ousted and someone else waltz in and benefit from it. But it feels right that Bobby’s mama would be the catalyst. HA!

I loved all the mamas, doe. Lisa Nicole Carson being in the mix was everything. Yvette Nicole Brown as Mike’s mom made me smile. La La Anthony as Flo DeVoe was a good look (they shoulda let her pop Roland). I’m here for all of them

Why does New Edition still dress the EXACT SAME WAY they did in 1983? When we watched the mini versions of Ronnie, Mike, Ralph, Bobby and Ricky perform, they had on tuxedo blazers with cumberbunds. Last year, I saw New Edition in concert TWICE, and that’s what they had on too. This time, they sweated through them so they might have started in fire engine red but they looked burgundy at the end. Why is Michael Rapaport always playing sheisty characters? Has that dude ever played a character with integrity? He just ain’t trustworthy ever. Out here being the white dude who sweet talked without having a concrete thing that he was gon do. Sounding too close to real life and the maniac running this country right now.

Can Lifetime take some notes from BET about making biopics? Lawd knows. It felt so good to see a movie based on real life folks where you didn’t wanna throw your houseshoes at the TV in protest of the craptasticness. Remember this abomination of a biopic?

Part 2 is tonight and part 3 is tomorrow. But I’ll need to watch the rerun of part 3 since it’s at the same time as Scandal’s return. You know good and damb well I ain’t missing that. So this will be my only New Edition recap.